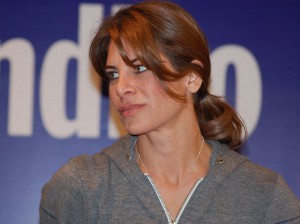 Want to know why you should never, ever feel guilty about eating chocolate? Because yesterday on Newbury Street, celebrity trainer Jillian Michaels was spotted at Hotel Chocolat on Newbury Street buying about $50 worth of chocolate!

The super-buff star walked into the shop a little after three in the afternoon with her partner Heidi Rhoades and their adopted three-year-old daughter, Lukensia, from Haiti, who has been with them since May 2012. Lukensia was wearing leggings, a t-shirt, and a tiny leather bomber jacket. Michaels showed off her guns in a sleeveless t-shirt and jeans, and wore her hair tucked under a baseball cap, with dark sunglasses on her face in order to keep a low profile. The star picked out a variety of chocolates for her and her partner, including some salted caramels and a selection of cheesecake truffles. Lukensia tried a salted caramel in-store, as mama Michaels plunked down her black AMEX card and California license for verification at the register. 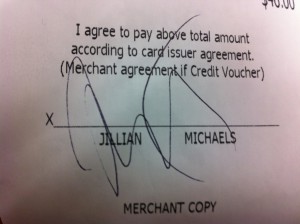 Michaels was in town for her current “Maximize Your Life Tour,” which made a stop in Lowell last night at the Lowell Memorial Auditorium.

The fitness guru hails from Los Angeles, California, and is best known for her appearances on NBC’s “The Biggest Loser” and “Losing It with Jillian.”