After a delightful brunch at Aquitaine in Chestnut Hill on Sunday, the Chocolate Companion and I decided that our appetite for decadent French cuisine was not quite satiated at that point, and realized we needed to end our meal on a sweet note. Luckily for us, we didn’t have to wander very far in our quest, as on the very same strip as our restaurant is a Rosie’s Bakery. 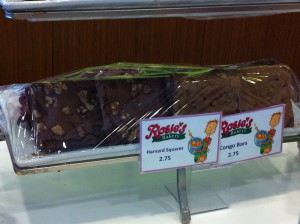 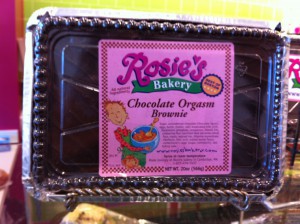 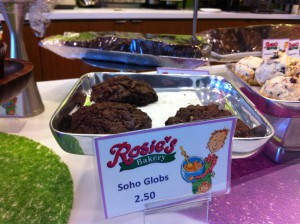 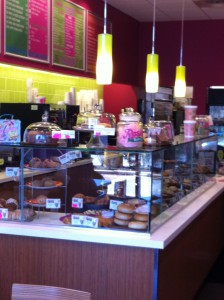 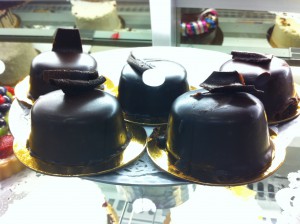 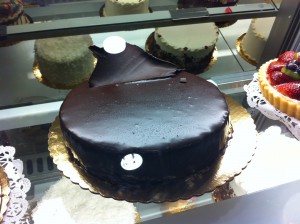 I am already very familiar with one rather infamous item at Rosie’s, their rich fudgey brownie known as Chocolate Orgasms. We happen to sample them on our South End chocolate tour at Code 10 on Washington Street, one of the few places in the area that is not a Rosie’s Bakery that gets to carry some of their items. Walking in to the Chestnut Hill location, we were also greeted with samples of said brownie, but it didn’t take me long to decide what I wanted… a chocolate croissant, or pain au chocolat,  of course!!

My eyes quickly scoured the display filled with so many chocolate-y desserts. I spied the Chocolate Orgasms, Harvard Squares (brownies with nuts), and something called SoHo Globs, but I zeroed in almost immediately on the last remaining Chocolate Butter Croissant. Surprisingly, the Chocolate Companion did not in turn pick a different chocolate item, and instead went for a sticky bun. 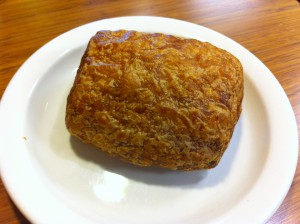 We sat in the back of the shop near the open kitchen, and dug into our treats. I did find the pastry part of the croissant to be super buttery, so the moniker was totally accurate. However, I was disappointed that the texture of the pastry was a bit tough, and I wondered if it had not been made fresh that morning. The chocolate part was rich tasting, but it could have used a little bit more of it for filling since the pastry part was so buttery, to help balance it out more.