Back in my increasingly longer ago college years, I actually was very tentative with my first forays into consuming alcohol. Going to college on a dry campus (Catholic school) meant that any drinking found going on in the dorms was dealt with swiftly and had rather serious consequences, plus the fact I was a lightweight who was careful about my spending meant that the alcohol imbibing that I did partake in was limited to a 2 drink per evening maximum at bars off campus maybe once a month. Seriously! Like a typical girl, however, I did gravitate towards the “girly” drinks–fruity concoctions with oddly creative names that could often easily double for lipstick or nail polish shades. 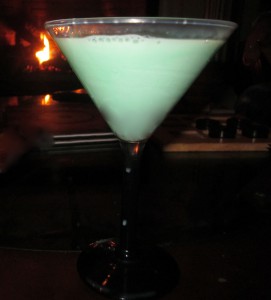 When discussing over AIM drinks we had tried and liked, a friend from back home had suggested I try a Dirty Girl Scout. Knowing how much I love chocolate, she suggested it not only because she knew I loved Thin Mints, but it was also oddly apropos, as we had both been in Girl Scouts together years ago in Connecticut.

The drink does taste like a Thin Mint in alcohol form, and is a terrific dessert drink. It has become my favorite drink over the years, and I have many fond memories of enjoying them in the company of great friends, coworkers, and sharing the concept with tour guests.

A Dirty Girl Scout is made up of equal parts of the following:

Shaken over ice, served in a martini glass.

When it comes out green (if they have the green creme de menthe), people usually get very interested in what it is you are drinking. This could be a really fun and different drink to order for St. Patrick’s Day this weekend! I know that quite a few of my fellow Bostonians will be partaking in alcoholic activities this weekend, but may I highly suggest, as two of my tour guests proclaimed last year when they ordered a couple pounds of liqueur-filled truffles from Teuscher Chocolates at 11 a.m. and started to pound them right away, let’s get chocolate wasted!

This drink is a lot of fun to order any time of year, though I do usually have to tell the bartender how to make it. One time, while I was having a drink with a friend downtown, I ordered a Dirty Girl Scout, informing the bartender of how to make it (he asked), and he served me the drink, but also whispered to me that he “didn’t want to embarrass me” but told me that it was not “creme de cacao” but it was actually “creme de COCOA.” This of course, came from his oh-so-informed 12 year career as a bartender from San Diego, whereas I was just a college educated English major with a better than average knowledge of language, pronunciation, and chocolate. The kicker came when I had him pull out the bottle to verify the spelling–to which he still chided me as what I’m sure he believed was just another ditzy young skirt. Not feeling settled, the next day at work, I printed out a copy of the entry from Dictionary.com, with the pronunciation guide, and sent him a postcard with it highlighted– kuh-kah-ow–and wrote on it “To save YOU from any future embarrassment.” Don’t mess with a chocoholic English major…

If you’d like something a little more chocolate-y and slightly less alcohol-y, why don’t you try these Dirty Girl Scout Pudding Shots.