So much of the chocolate world is full of funny myths, happy accidents, and even completely off-base accounts. I’m not sure if it is a result of the type of food culture we are brought up in in America, or simply a lack of awareness, but many of the things we are told to believe about chocolate are misleading at best. Every now and then, however, some things in the chocolate world end up being so ridiculous, they are actually true!

Many folks are familiar with chocolate ganache. The majority would even say that it is something that they seek out in desserts–a chocolate ganache covered cake or cupcake, or the creamy filling of a hand-rolled truffle can be absolute heaven on earth. But what exactly is ganache? From the French, in a word, it actually means “fool” or “imbecile”! So why would something associated with such an amazing dessert earn such a moniker? The story goes that in a 19th century Parisian pastry shop, a clumsy apprentice knocked some hot cream into a vat of chocolate. The patissiere cried out at the ungainly youth, calling him “un ganache” (an imbecile), but had to backpedal a bit after trying the concoction, as it’s delicious, velvety texture seemed a perfect complement to so many cakes and pastries. 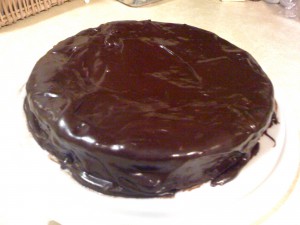 Ganache as we know it today, is, like a fool, very simple. It’s made by heating heavy cream and adding it to chopped chocolate. The two ingredients are whisked together, sometimes with a touch of butter added, to form a glossy, liquidy, rich, yet creamy chocolate emulsion. Ganache is the central portion of most chocolate truffles–and probably my blood type by now.