Since the start of the new year, Starbucks has been pushing it’s newly launched “blonde roast” coffee, aimed at those folks who couldn’t stomach their traditional darker roast coffee. Now, not being a coffee drinker myself, the news was merely a blip on my radar, and I even passed up the chance to to try a free sample when I was encountered by some gents from the coffee chain wearing giant tanks of the stuff on their backs walking around downtown Boston. Just this past Friday, however, I was presented with the opportunity to try another type of blond–chocolate, as it were, recently launched by French chocolatier Valrhona. 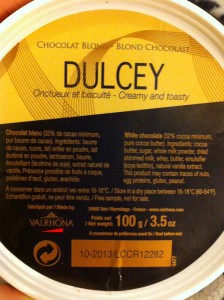 Named “Dulcey” and categorized as a new, fourth type of chocolate–somewhere between white and milk, and not even close to dark, this chocolate contains 32% cocoa butter, and was invented, as it turns out, by accident, as seemingly so many chocolate creations and techniques are. Eight years ago, Frédéric Bau, executive chef and director of Valrhona’s Ecole du Grand Chocolat, accidently left a small amount of white chocolate in a bain marie for around 10 hours. When he returned to the chocolate, it had turned a sort of golden caramelish color and had the aroma of shortbread. He tasted the chocolate, and was pleasantly surprised at it’s flavor, and presented it to the executives at Valrhona. They also were impressed, and set about reproducing the chocolate on a large scale. The process proved difficult, and after much trial and error, the chocolate engineers at Valrhona finally found success eight years later. The chocolate was first launched on a limited scale in the U.K. in the fall of this year, and was just announced in the U.S. on Friday. I actually had some in my house on Thursday afternoon. 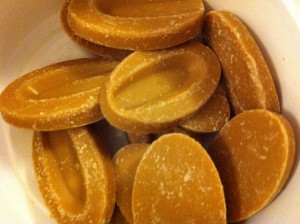 The chocolate is, as they say, on the sweet side, with an extremely creamy texture, with warm, buttery, toasty notes as well as a subtle salt note at the end. It does not actually contain any caramel in the chocolate, despite the color, but does contain whey and butter, two things that are not traditionally found in quality chocolate. The blond chocolate should be an interesting addition to the repertoire of most pastry chefs, as I could see it blending nicely with things like hazelnuts, bananas, caramel, apricots, coconut, and yes, coffee!