Home/History of Boston Desserts
Previous Next

Today I fly back to Boston after nearly a week in Colorado. While I did get to try some rather yummy chocolates and chocolate desserts while here, there is something about the sweets in Boston that seem to make them extra special. Perhaps it’s because of all of the historical ties that Boston and the greater Boston area has to some pretty fabulous chocolate desserts! 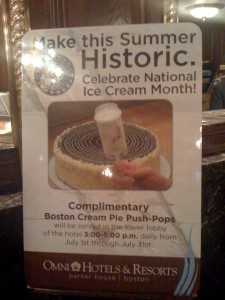 Chocolate chip cookie: This cookie was created by Ruth Graves Wakefield, proprietor of the Toll House Inn in Whitman, Massachusetts, in the 1930s. While making her “Butter Drop-Do” cookies, Mrs. Wakefield ran out of nuts. She substituted chopped pieces of a Nestle’s semisweet chocolate bar, thinking that the pieces would melt and make a chocolate cookie. The chunks kept their shape, but she served them to her guests anyways not sure how they would react. Imagine someone coming to you and saying “So I made this cookie, it’s got chocolate pieces in it, let me know if you like them…” Ha! A world before chocolate chip cookies is hard to imagine. Surprise, surprise, the resulting “chocolate crispies” were a huge success. Ruth started handed out the recipe to friends and family, and they started making them. Nestle officials soon noticed an increase in sales of their chocolate bars in the greater Boston area, discovered the cause, and started scoring their bars for easier breaking. They also gained Mrs. Wakefield’s permission to print the recipe on the package. In 1939, Nestle’s semisweet chocolate morsels made their debut and Nestle bought the Toll House name in 1940.

Brownies: While chocolate brownies were actually invented in Chicago at the Palmer House Hotel, one of the very first printed recipes was published in a Boston Cooking-School Cookbook in 1896 by Fannie Merritt Farmer.

The Boston Cream Pie: The official state dessert of Massachusetts, as declared in 1996. Yes, the state government spent time and money legislating that. Created by French chef M. Sanzian at Boston’s Parker House Hotel (today the Omni Parker House), it is in fact a cake, and not a pie. The hotel is well-known through history for many reasons. Some well-known people have worked at the Parker House, including Hô Chí Minh who was a baker in the bakeshop from 1911 to 1913, and Malcolm X, who was a busboy in the early 1940s. John F. Kennedy announced his candidacy for Congress in the hotel’s Press Room, and held his bachelor party there. JFK also proposed to Jackie Kennedy at the Parker’s Restaurant (at table 40). The Omni Parker House is also where the Parker House dinner roll was created. 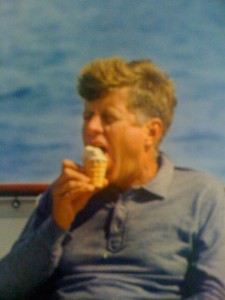 Even the Kennedys appreciated the state of Massachusetts’ deep dessert history!