A little over a week ago, I was lucky enough to get sent on a business trip to the lovely city of Baltimore, Maryland, an area I had only previously driven through (or been driven through, rather) on a family trip to Washington D.C. While my time in the city was limited–I was there just a little over 24 hours, and a part of that time was spent leading a tasting event in Hunt Valley, I did have a few evening and afternoon hours to explore, on my own. Naturally, part of that time was spent searching out the best chocolate in the city.

Through a careful combination of Googling, asking locals, and reading Yelp reviews, I decided to venture over to Rheb’s Homemade Candies. The tiny shop is located on an outskirt of the city, just across the street from St. Agnes hospital. I have to admit, I nearly missed my destination entirely, as their brown sign is not the most eye catching, and the store itself is set back from the main road. 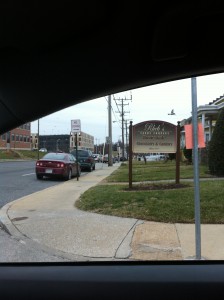 After driving passed the spot a couple times in my rental car, I finally caught sight of the shop, down a little narrow side street, with a parking lot set down a small hill. The store is teeny tiny–it’s actually a converted garage. 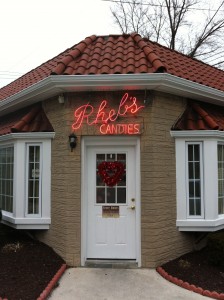 I wish I had a chocolate store in my garage.

And while the cars parked end to end directly in front of it might have tipped me off, it wasn’t until entering the door I saw how crowded it actually was. The colorful shop was filled to the brim with a fun array of chocolates, and people who were dying to purchase them! 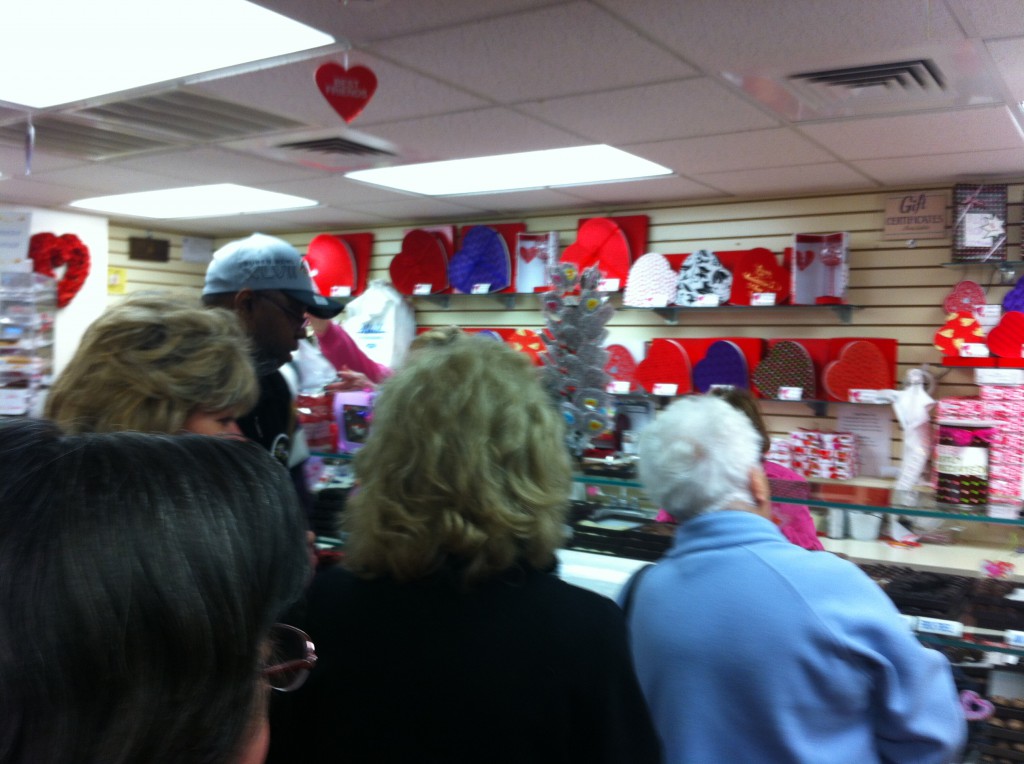 Packed to the brim!

The Rheb’s Candy shop has been in existence for three generations, with production of the treats at that location dating all the way back to 1917. Today the shop is still run by family members, with Louis Rheb’s self-taught recipes still in use.

After slinking my way through the crowd of eager chocoholics, I was able to take a gander at the wide selection of taffies, brittles, jellies, truffles, clusters, and other bits of chocolate goodness, in white, milk, dark, and even sugar-free varieties. 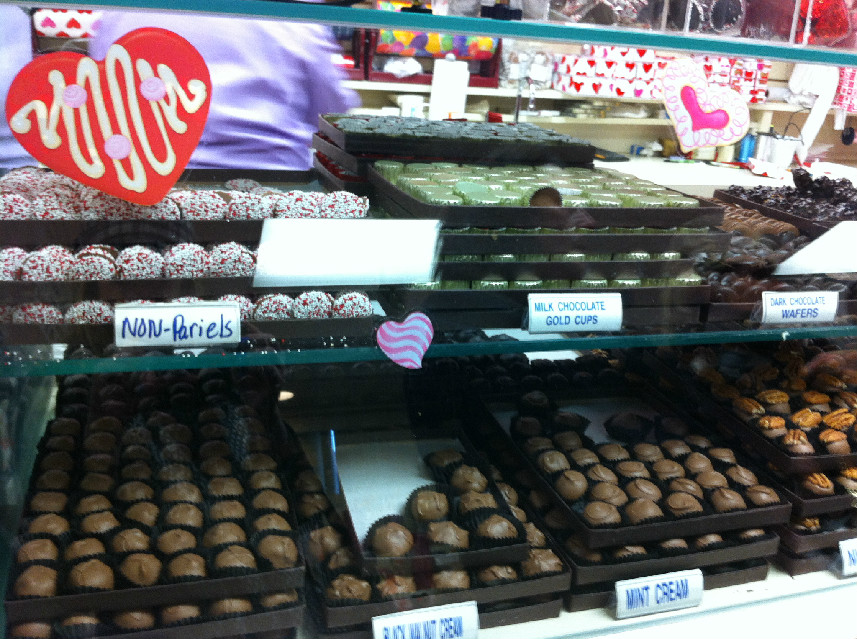 While some came pre-packaged in boxes and bags, most of the customers that were waiting were doing so with the intention of choosing their own mixture to be boxed up before them. With Valentine’s Day exactly a week away at that point, the options for boxes included gorgeously patterned hearts in small, medium, and large sizes. My eyes immediately went to a black and white patterned piece–a (non) color combination I’ve always had a weakness for. 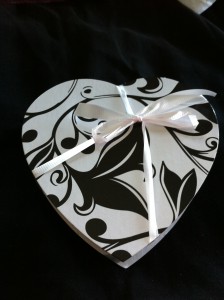 As I prepared to pick out my chocolate pieces, I realized that the customers being served were being chosen by number, as there was no discernible line. I weaved my way back near the door, and took a number from a very old looking ticket machine, and patiently waited my turn. 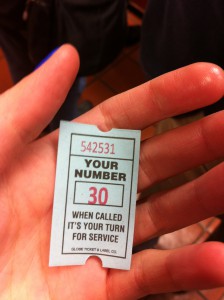 The women behind the counter were almost all silver haired ladies, wearing brightly colored coats that looked a bit like nurse’s scrubs. 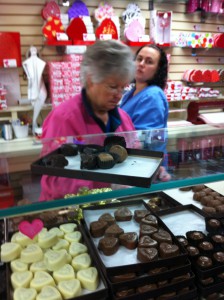 Free samples while you wait! 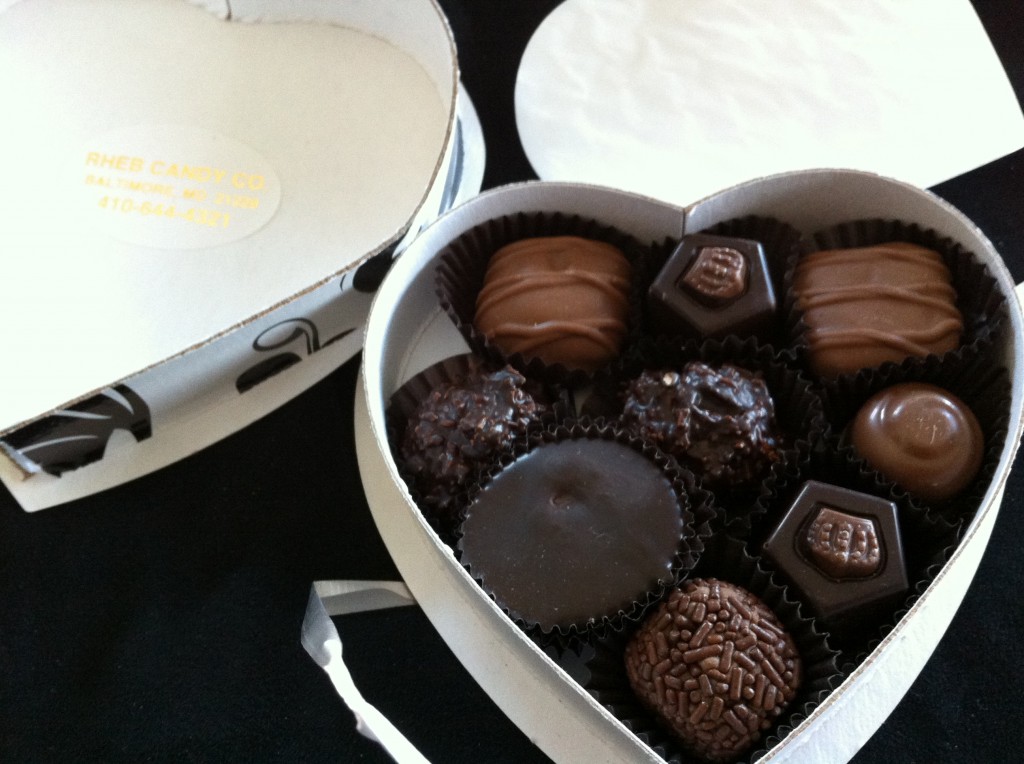 The box was weighed, tied with a cute little white ribbon, and it was passed across the counter to me along with a ticket that specified the price so that I could bring it to the delightfully cheery cashier near the door who rang out my order with a smile. 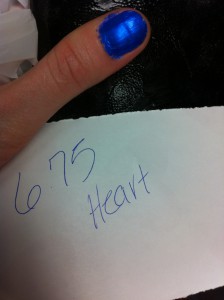 Very satisfied with my chocolate purchase, I made my way back into the Inner Harbor neighborhood area of downtown Baltimore for lunch, and was excited to stumble upon this: 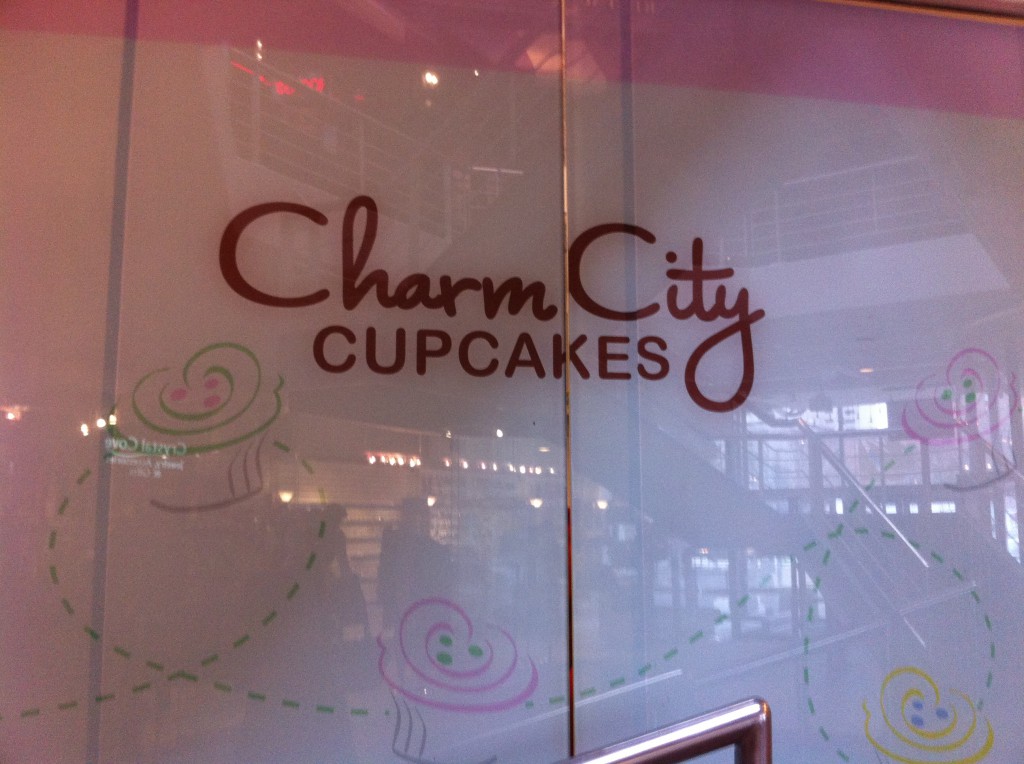 As I also have had a hand in doing research for the now infamous Cupcake Crawl, cupcakes have become somewhat a part of my professional purview as well. 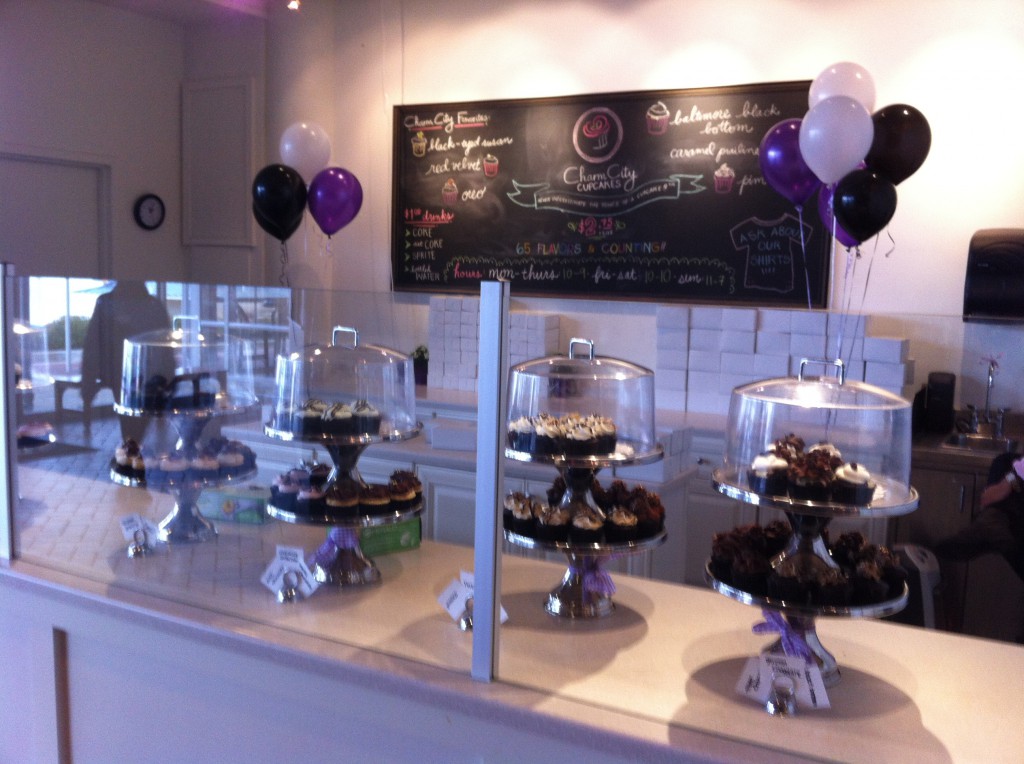 Before heading back to the airport, I grabbed a black bottom cupcake with chocolate frosting, and found it to be quite good! 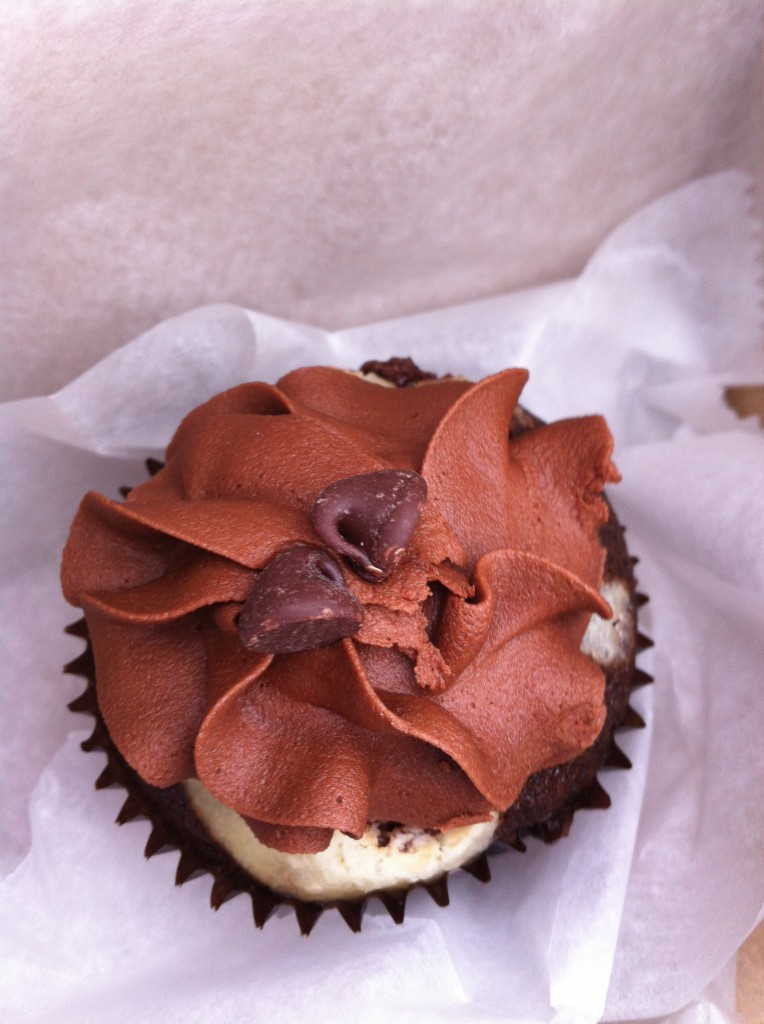 While it was rather brief, my Baltimore experience was rather enjoyable. The parts of the city I got to explore were fun to check out, and are probably even more so in warmer weather (it was in the low 40s while I was there). It was unfortunate that I had to return before the weekend, as not only did it mean I got back to Boston in time to experience the blizzicane, but was also told about a chocolate-themed event being held at one of the hotels in Inner Harbor that very Saturday I would miss! Ah well! Perhaps I will be able to return to Baltimore sometime in the near future and have more chocolate adventures!