A week ago this past Sunday, my Mom came up for a visit  since she had a long weekend thanks to  Connecticut public schools’ April vacation. I decided to take her to Captain Jackson’s Colonial Chocolate Shop, a new exhibit at the Old North Church that had just opened the day before on April 13. The shop features historical interpreters from the Old North Foundation and Freedom Trail Foundation in cooperation with Mars Chocolate Company, makers of  American Heritage Chocolate, an authentic colonial-style chocolate recipe. The shop is located at the Clough House, adjacent to Old North Church on Unity Street. 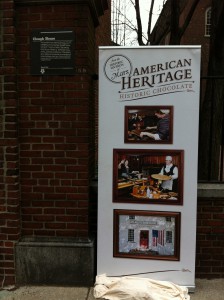 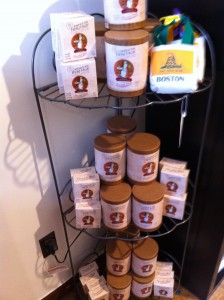 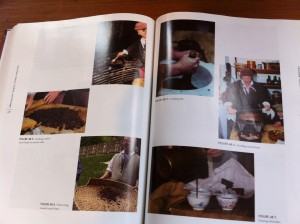 The space where the shop is located is small, but immediately upon entering you are hit with the smell of a rich, spicy chocolate. As I have had the American Heritage Chocolate before, I knew what to expect, but was excited to see how it would be presented. We were soon greeted by a lovely woman dressed in colonial garb, who encouraged us to gather round for her next demonstration. She then proceeded to tell us about how hot chocolate was made and sold in colonial times, noting that each chocolatier had their own special recipe, but none of them ever wrote it down! Turns out, these recipes were regarded to be of high value, and by never recording them, they were assured that no one would ever steal them! Based on what we know of the time though, it is safe to assume that the colonists used all of the following in their hot chocolate:

All of the ingredients, along with a teensy bit of sugar (sugar was very expensive and hard to come by) were added to nibs that were ground on a heated stone, and rolled into a form that resembled a cinnamon stick, that could be grated into a cup or pot and combined with hot water to make a drink.  We then got to try some of the hot chocolate, as the historical interpreter answered any questions from the crowd. 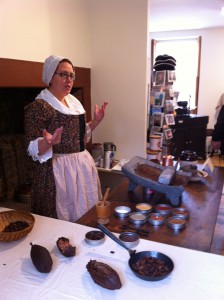 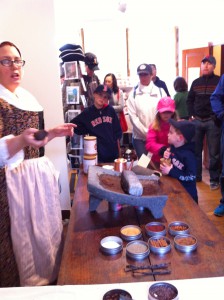 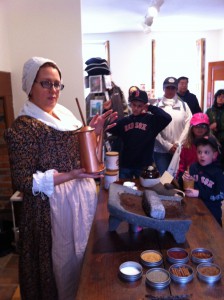 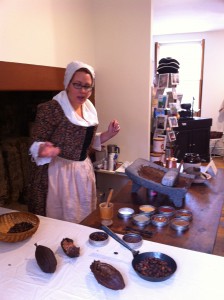 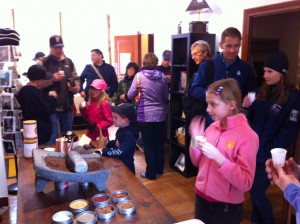 It was a very interesting little place, and will be a great historical spot to add to the area. While I was there, I spoke to their marketing manager who said they saw about 500 people come through on opening day. Right now they are only open on the weekends, but will be open 7 days a week once summer gets closer.