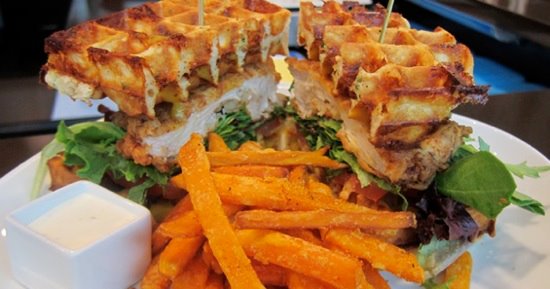 I grew up without cable. Until I left Connecticut to attend college in Boston, the television set that I regularly watched TV on in my parents’ house had rabbit ears on them that necessitated adjusting with nearly every channel change. When I finally moved into my own apartment post-graduation, a cable package was one of the first things I ordered. Now, there are a few cable channels that my set often lands on, but none of them is ever so universally appealing in my house as the Food Network. Whether it’s Chef Robert saving some poor defunct diner from financial ruin or the Iron Chefs showing us exactly how versatile a super rare ingredient like yubari melon is, if you spend any amount of time in my apartment, chances are, the Food Network is going to make an appearance.

Now, while not one of my favorite shows, “Food Network Challenge” can be quite an interesting contest of cake masters, often given some sort of theme with which to build an impossible cake around, and then! have to move from the prep counter to the display table for judging. More often than not, one of the cakes, at least partially, goes splat, and it can be both heartbreaking and hilarious at the same time. Luckily, the host of the show, Keegan Gerhard, is a calming, knowing presence, who always seems to be able to reassure the otherwise distraught contestants in just the right way.

Not too long ago, it came to my attention that Gerhard also happens to be the executive chef of D-Bar Desserts in Denver. Similar to Finale in Boston, the spot specializes in awesomely well-crafted desserts, while also offering a scant but solid savory menu. In realizing this, D-Bar suddenly jumped to the top of my list of “must-see” spots in Colorado, and luckily, it did not disappoint.

My first visit to D-Bar actually came this past summer, when my Chocoholic Companion (my real reason for coming to Colorado) had a college chum that also happened to be passing through town. The three of us hopped in the car one evening and headed to uptown Denver, eagerly awaiting what was sure to be delicious food, preferably at a patio table. Now, in my advance research before arriving at D-Bar, I stumbled across a rather interesting suggestion. It had been listed on a couple of web pages, that D-Bar actually had a rather good fried chicken sandwich on their savory menu. Intrigued, we all searched for this particular item when we were handed our menus. Not just any fried chicken sandwich. Fried chicken with honey mustard sauce, mesclun greens, and sweet tomatoes on… a savory belgian waffle with white cheddar, Parmesan, and herbs baked right inside. And a mountain of sweet potato fries on the side. They call it the Southern Fried Belgian. I call it what had been missing from my life. I ate everything that was placed in front of me–and I don’t even care all that much for sweet potato fries!

However, the story does not end there, of course. Dessert! Our reason for coming! Many would say, my reason for living! There were many chocolate options, but the Chocoholic Companion and I decided to be judicious and order a different chocolate dessert each and then switch halfway through. I started with their  “Molten cake thingy that everyone has,” which in their case, meant they had baked a truffle inside! They listed a Madagascar 64% chocolate as their source–I assume they use Valrhona–a pretty safe bet, and it was complemented by some nicely mellow vanilla ice cream and a sweetly sharp strawberry rhubarb compote. It came beautifully presented with candy sugar pulls and dried strawberries exploding out of it, perhaps a visual cue as to what the flavors were about to do in my mouth. 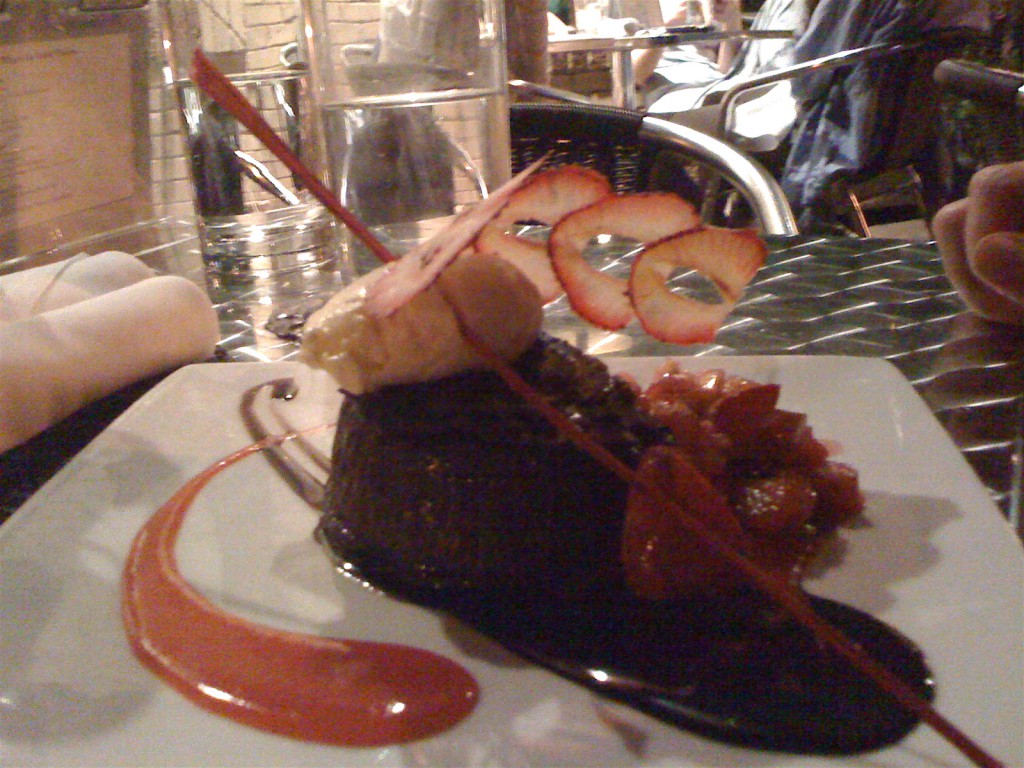 C.C. ordered a “Cake and Shake,” which was a 3-layer chocolate cake, Manjari frosting (Valrhona again), and your choice of a chocolate or vanilla milk shake. I’ll let you guess which flavor he chose. The milk shake came with some delightful little crunchy chocolate bits on top, which contrasted nicely with the super-creaminess of the drink. The cake was just heavenly–a slight berry hint to the chocolate flavor, probably from the Manjari frosting, which was not too sweet, or sticky, and was applied in just right amount around the moist cake. 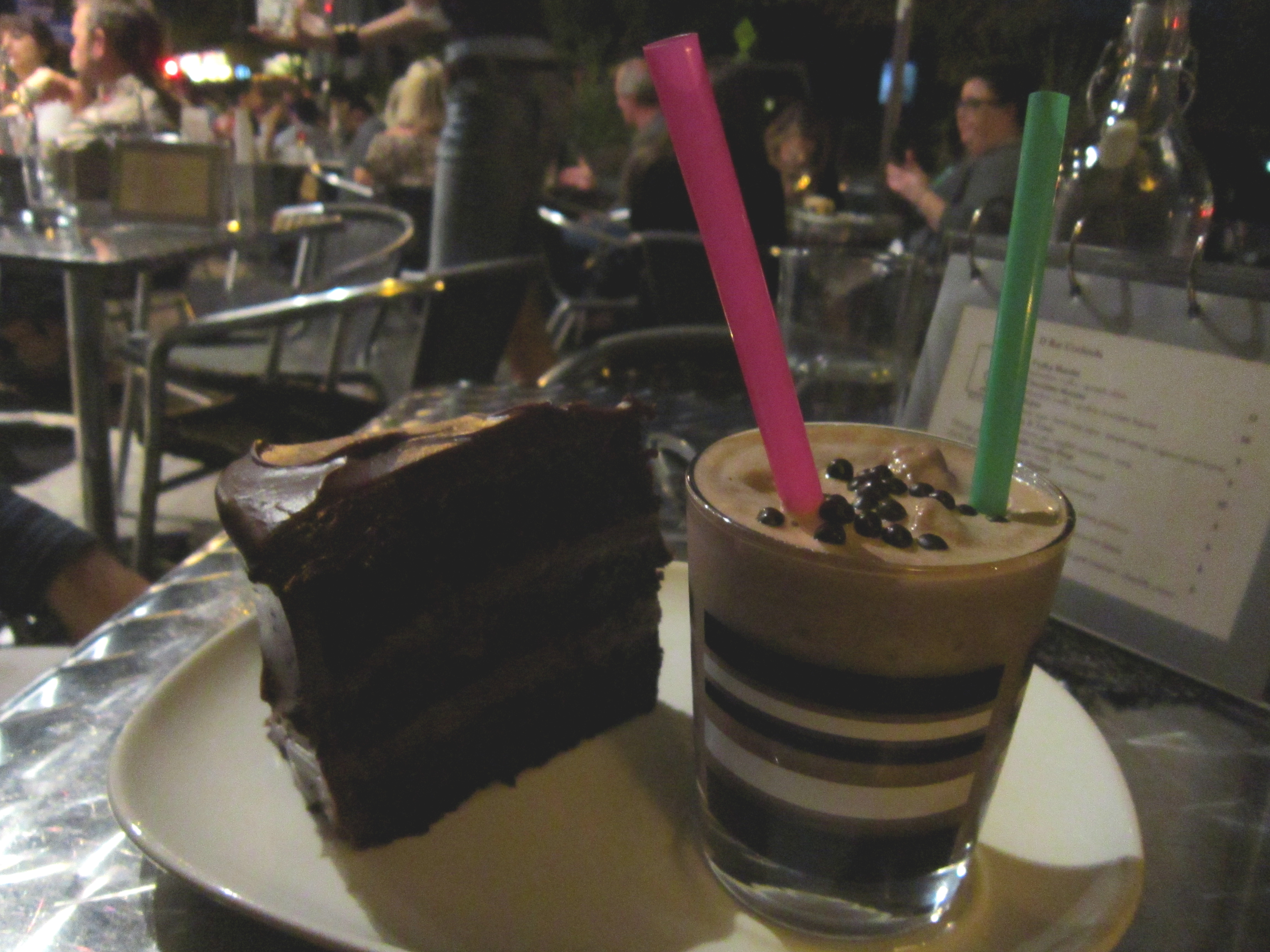 Obviously, the evening, thanks to the food, was a hugely enjoyable event, which has prompted us to return to D-Bar since, and will most certainly again!
Posted In: Cake and ShakeD-BarFood NetworkKeegan GerhardManjariMolten Cake ThingySouthern Fried Belgian
Previous

In Search of the Perfect Pain au Chocolat