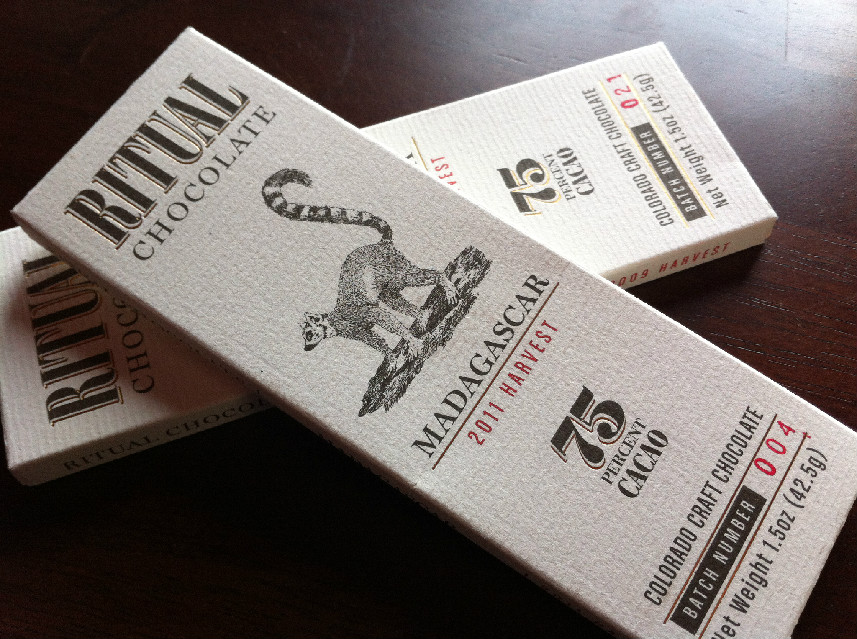 One of the most interesting aspects of learning more about the chocolate world is being awakened to the wonderful possibilities that lay within the seemingly simple chocolate bar. What most of us were brought up eating–those teeny tiny Hersheys bars we often got in our trick-or-treat buckets, do not offer an accurate depiction of the great variety of flavors and even textures that can be found when one tries chocolate bars of different origins and different processes.

As I have gone about my travels, I have made it a point to try chocolates that are special, unique, or well-known in that area. Since I am currently visiting Colorado, I wanted to see if I could find chocolates that were special to the area. After a bit of Googling, I happened upon a little craft chocolate company called Ritual Chocolate. The company was started by a husband and wife team in 2010 in Boulder, CO, before moving their production to Denver. Their small batch, single origin bars are “made entirely under one roof using traditional, European methods with ethically-sourced cacao from around the world.” Their offerings are limited–they currently do four bars from Balao, Costa Rica, Madagascar, and Gran Couva, in 75% cacao content. 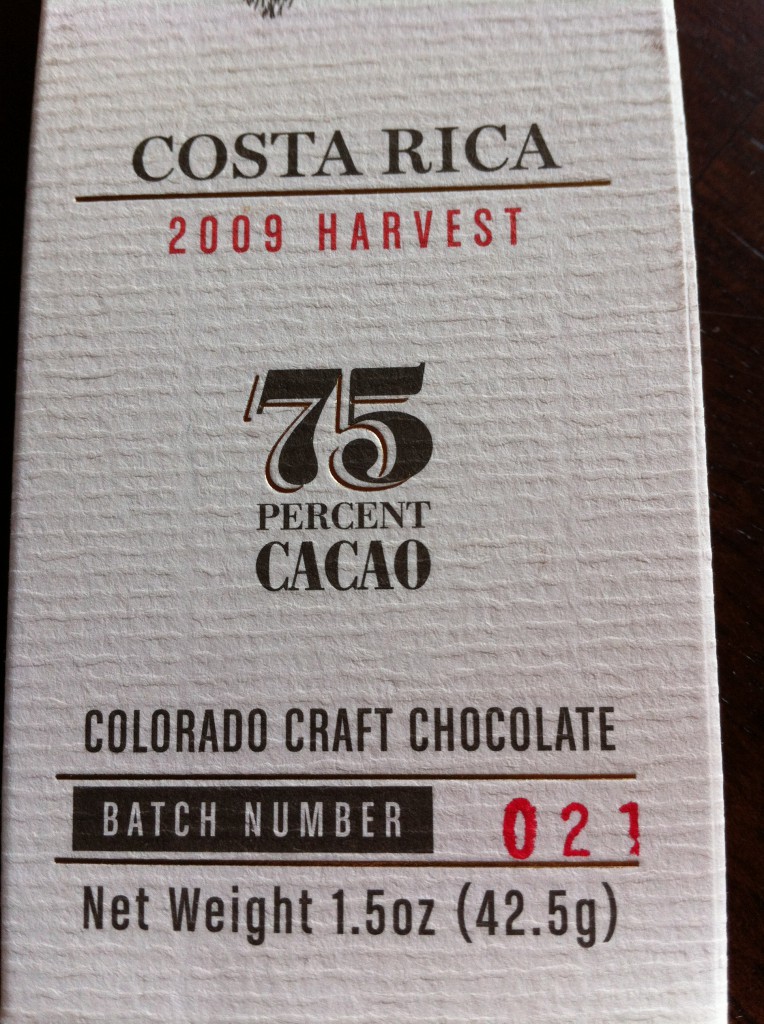 The bars are available online and through locals boutiques and coffee shops in the Denver and Boulder area. While you can purchase the bars through their website, unfortunately, they do not feature a comprehensive list of brick and mortar shops that also sell their bars, so I had to do a bit more Googling to track down some stores in the area where I could get some. I ended up at a Crema Coffee House on the north side of Denver not far from the ballpark. There, I was able to get my hands on the Madagascar and Costa Rica bar, from the 2011 and 2009 harvest, respectively. 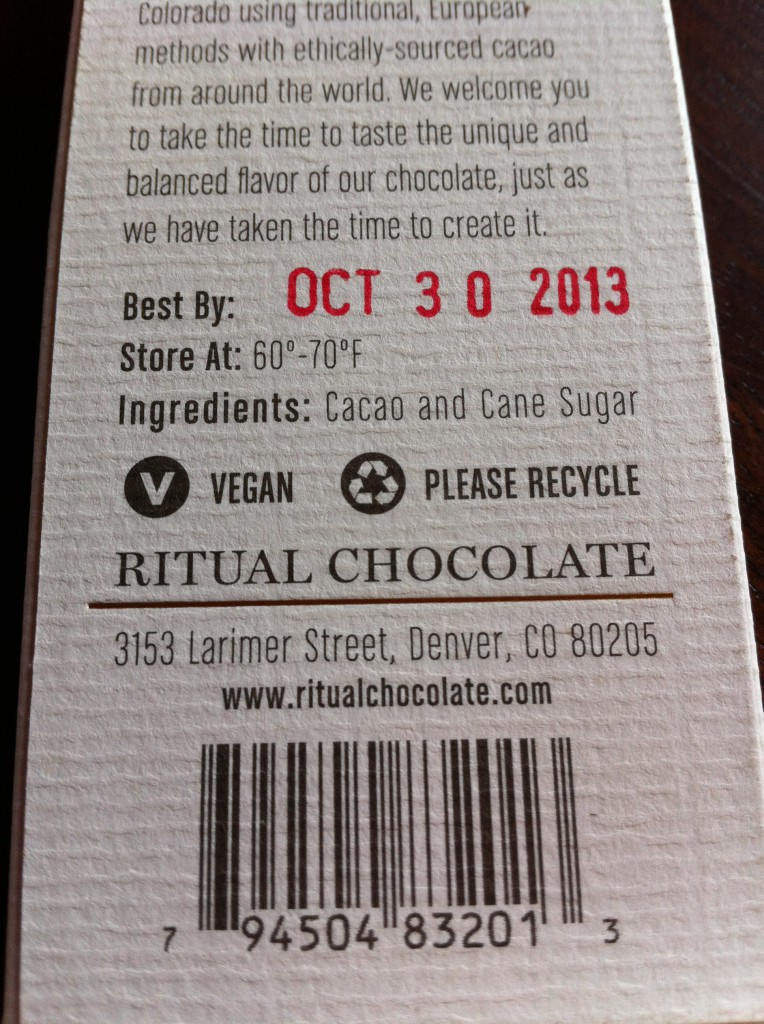 The simple textured cardboard wrappers on the bars are printed on recycled paper, and include the year the cacao beans were harvested, the batch number, and a best buy date on the back. They also include recommendations for storage temperature (between 60 and 70 degrees Fahrenheit), as well as the ingredients list. All two of them. Yes, there are only two things contained in a bar of Ritual Chocolate–cacao and cane sugar, making their chocolate not only suitable for vegans, but also ideal for those obsessive label readers that are particular about every single food item they ingest. 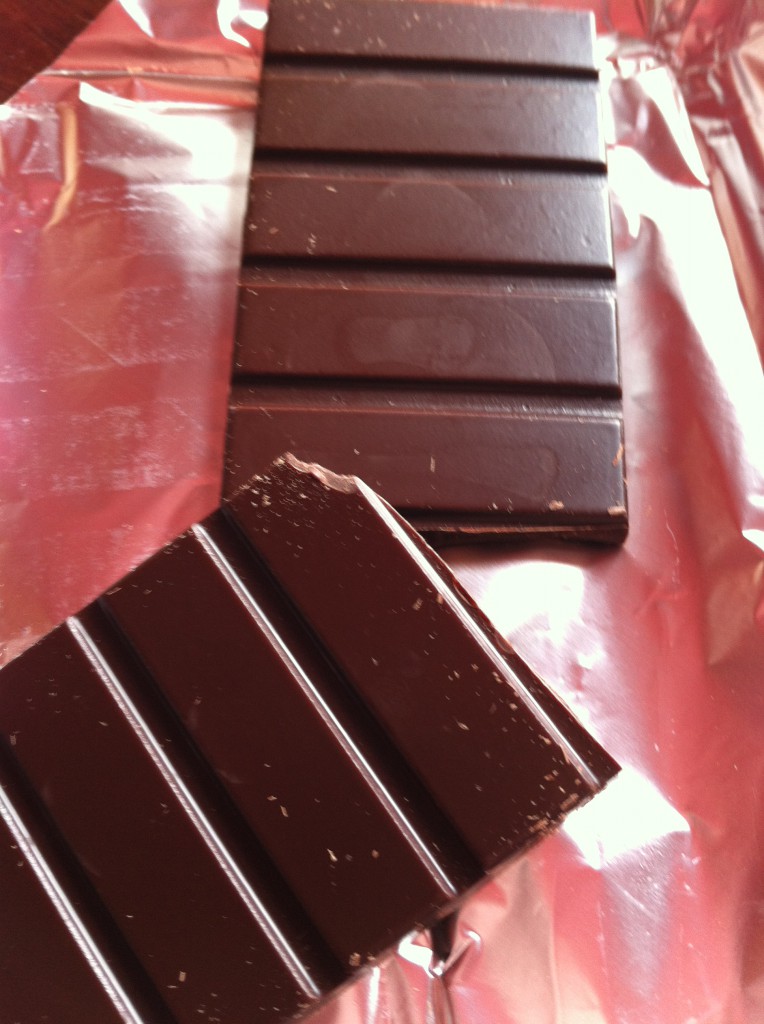 The bars were exceptional. I found the tasting notes on the back of each wrapper exactly on point. The Madagascar bar had notes of citrus and nuts, as well as some vanilla on the back end. The Costa Rica bar had “bold, earthy peaks and hints of blackberry and walnut” as well as a bit of salt as an after note. Both bars were extremely aromatic after unwrapping them, an important component as smelling the chocolate is an important part of preparing your palette for tasting. They even put a tiny reminder on the top inside flap–“Savor SLOWLY”–these bars are not for snacking! These are very special chocolate bars indeed.

As it turns out, the Madagascar and Costa Rica chocolate bars just received gold awards at the 2013 Good Food Awards. The awards ceremony was recently held in San Francisco in January. The Good Food Awards recognizes artisan food products that are exceptional in taste as well as socially and environmentally responsible. 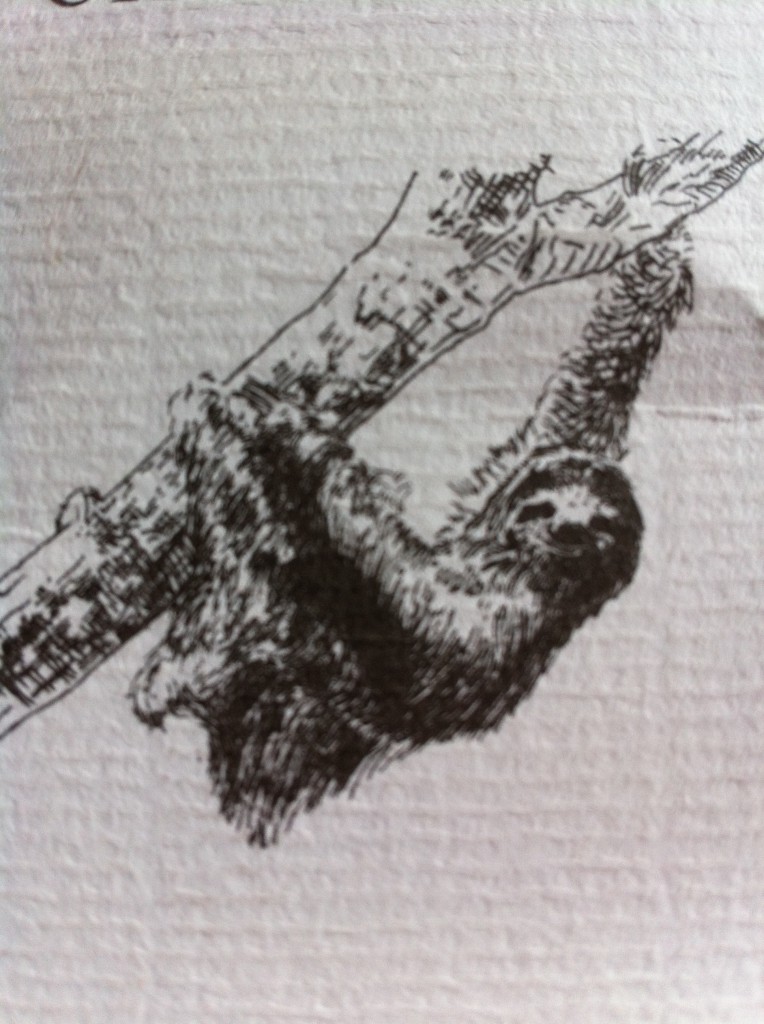 They even put a cute picture of a sloth on the packaging!